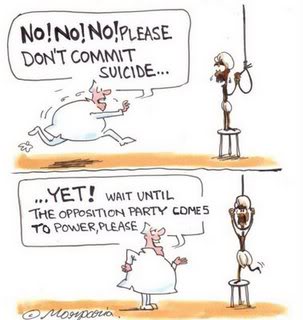 This is the most debated news on Indian media now! Maybe for this week, till we get another sensational news. Political parties are taking their respective pickings to do politics. Blaming one another and trying to follow their traditional strategy to make people fools. None of the political parties ever tried to resolve the agricultural issues on a serious move. So many projects are been dragged for political and business reasons. Meanwhile, farmers are continuing to commit suicide across the country. When the media covered a single farmer’s suicide on daylight, the politicians are ‘ullu banaving’ making fool of us.

Delhi BJP demands AAP Govt to give compensation of Rs 5 crore to farmer’s family – What about thousands of farmers who died without making a political impact as the farmer who committed suicide in Delhi recently? Our politicians are exposing themselves by making such statements and irresponsible blaming on each other.

Why no Indian Political party is focusing on the solution to end this? They are fighting over how to acquire lands from farmers by various laws to favours industries. Why no one is talking about Indian Rivers Inter-link project?

The Indian Rivers Inter-link is a proposed large-scale civil engineering project that aims to link India‘s rivers by a network of reservoirs and canals and so reduce persistent floods in some parts and water shortages in other parts of India. Which can address the causes of farmer suicides and also enrich the Environment of the whole country!

The raw truth is, projects like inter-linking rivers would unite the people of India together. Maybe while executing the project some politics may happen but once the project gets completed the whole nation will get the benefits of it. People will come together ahead of their regional and states differences. Which will revamp agriculture, India will become more of a Green Nation than an industrial nation. This of course, will prevent Industrialists to an extent and prevent politicians’ tie up with Industries and they cannot make easy money. That’s why such effective projects are kept on hold or progressing at snail pace!

As of 2013, a total of 296,438 farmers had killed themselves in India since 1995.[4] Most farm suicides have been linked to debt, a sharp rise in input costs, serious water crises, price volatility and crop failure due to pest attacks and disease. India is an agrarian country with around 60% of its people depending directly or indirectly upon agriculture. Farmer suicides account for 11.2% of all suicides in India.[1]

In Britain farmers are taking their own lives at a rate of one a week.  In India, one farmer committed suicide every 32 minutes between 1997 and 2005. Read more from UN’s article here

The following data is bit old, but shared here for analytical purpose.

Indian Politicians must understand that people are no fools and we can read their minds so well! Instead of blaming one another, they must act upon solutions. Shame on them if they continue doing politics with Farmers and commoners of this country.

This site uses Akismet to reduce spam. Learn how your comment data is processed.

No products in the cart.